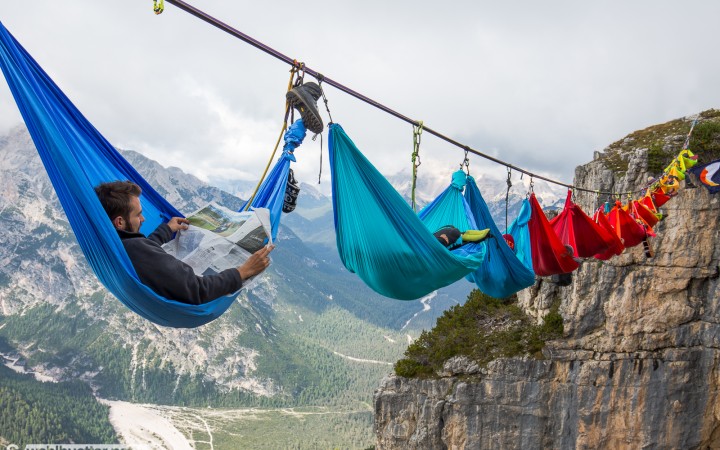 Monte Piana in the Italian Dolomites is a special place with a long history as the organizers of the annual Highline Meeting in Monte Piana Alesandro d’emilia & Armin Holzer explain: „JUST HUNDRED YEARS AGO WINTERS UP HEAR WERE CHARACTERISED BY BOMBS, GRANADES AND LOTS OF PAIN. OUR IDEA WAS TO RE-EXPERIENCE MONTE PIANA IN FRIENDSHIP AND PEACE WITH EACH OTHER, ACCOMPANIED BY KINDHEARTED FEELINGS DURING THE DAY, AND LULLED TO SLEEP AT NIGHT BY MAGICAL SILENCE.“ 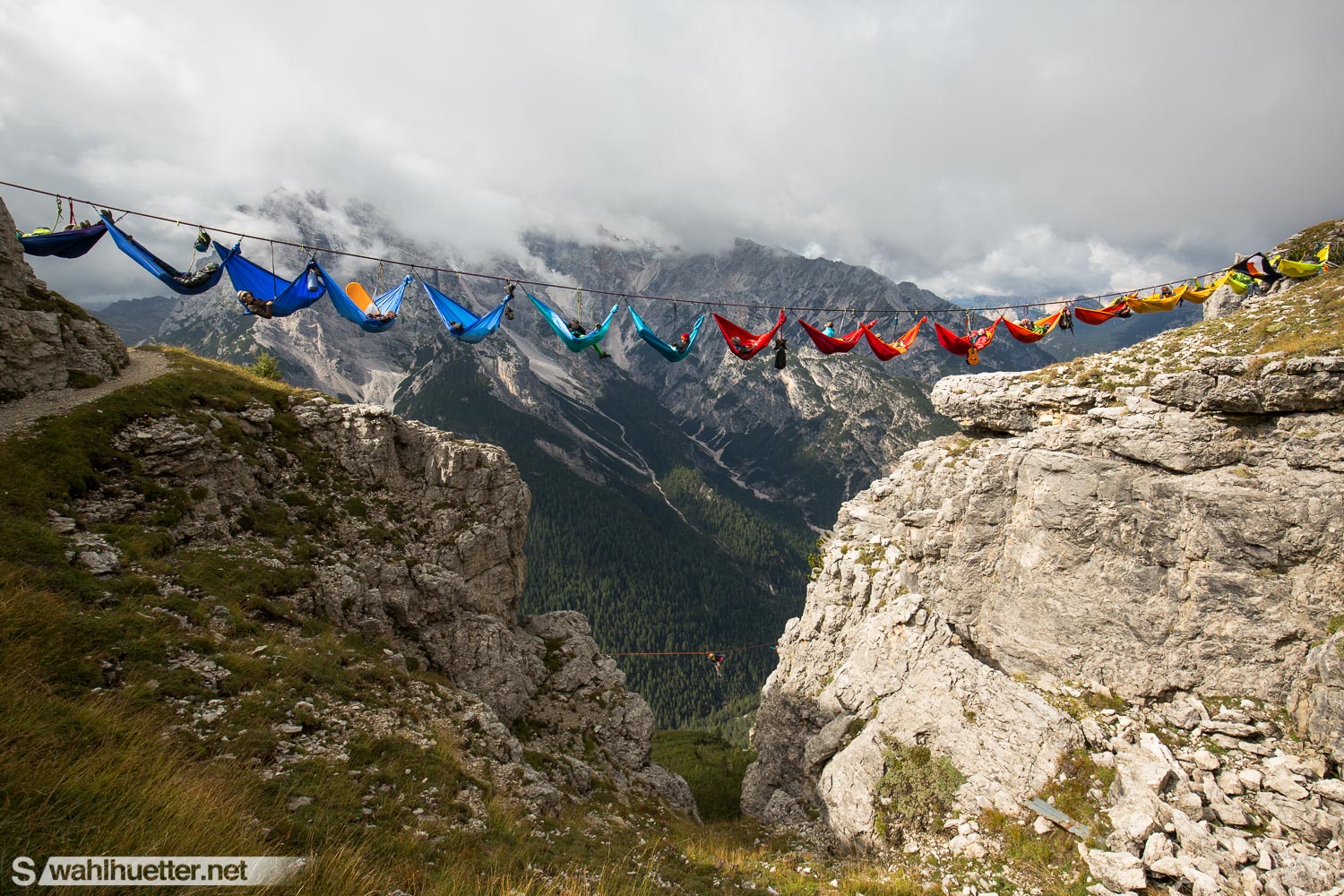 The idea to sleep in a hammock on such an incredible place was born at the very first Highlinemeeting at the Monte Piana in the year 2012. The adventurous pioneers Armin Holzer, Alex D’emilia and Igor Scotland were so impressed by this experience that they wanted to share it with their friends. The idea of a collective hammock gathering during the annual Highline Meeting on this special place was born. In the following years the concept developed and on September 10th 2015 this unique project took place already for the third time.
After spending the night in the hammock, the three founders of this idea were joined by other athletes in an early morning hammock session. In total 26 people came together to form a colorful and especially designed rainbow in 17 hammocks. A symbol of peace and a tribute to the past. The place is chosen not only for its natural beauty but for its historical importance. This area is an open air museum to honor the memory of the 18.000 young soldiers who died here during the First World War. Its 7 km of trenches are still visible. 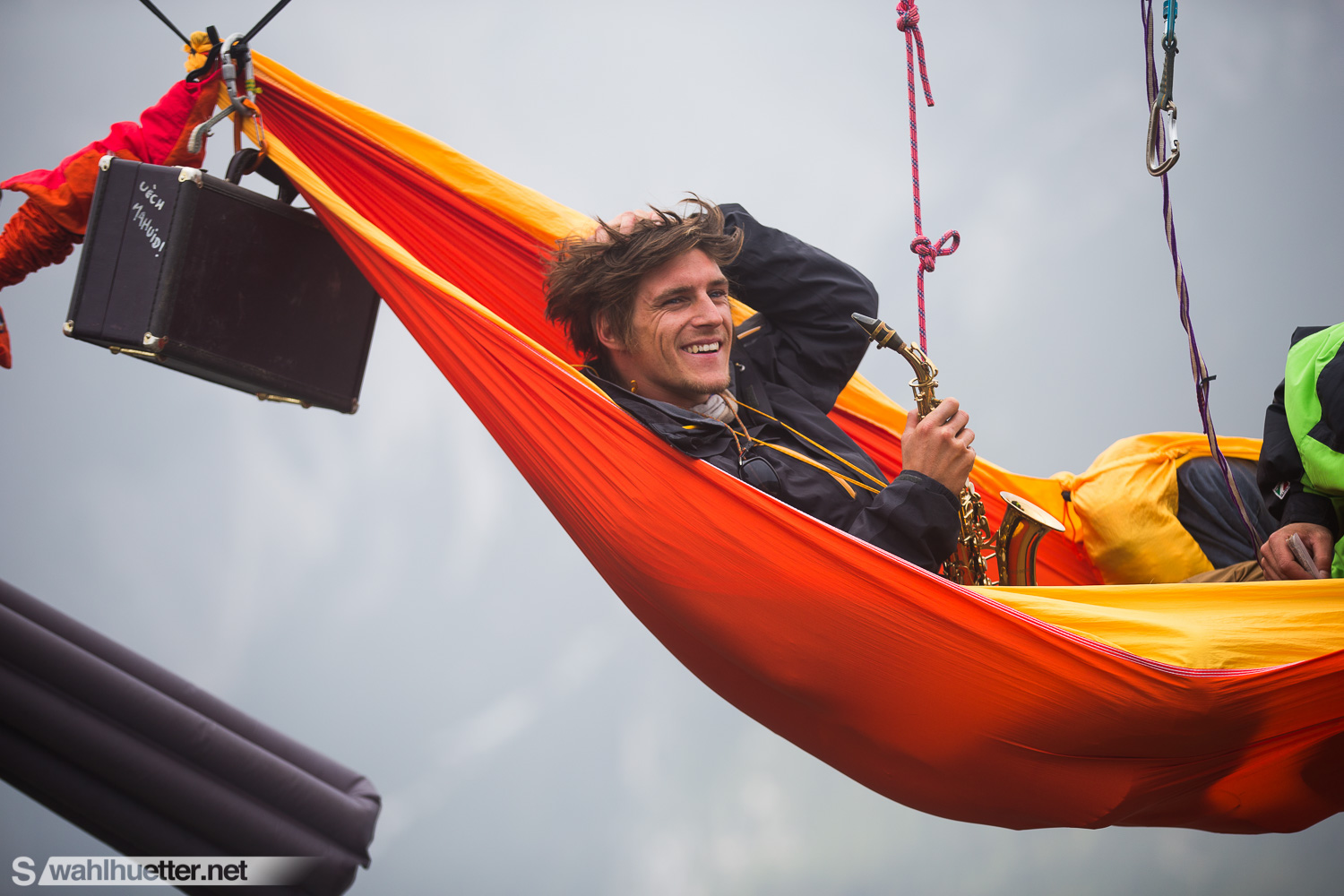 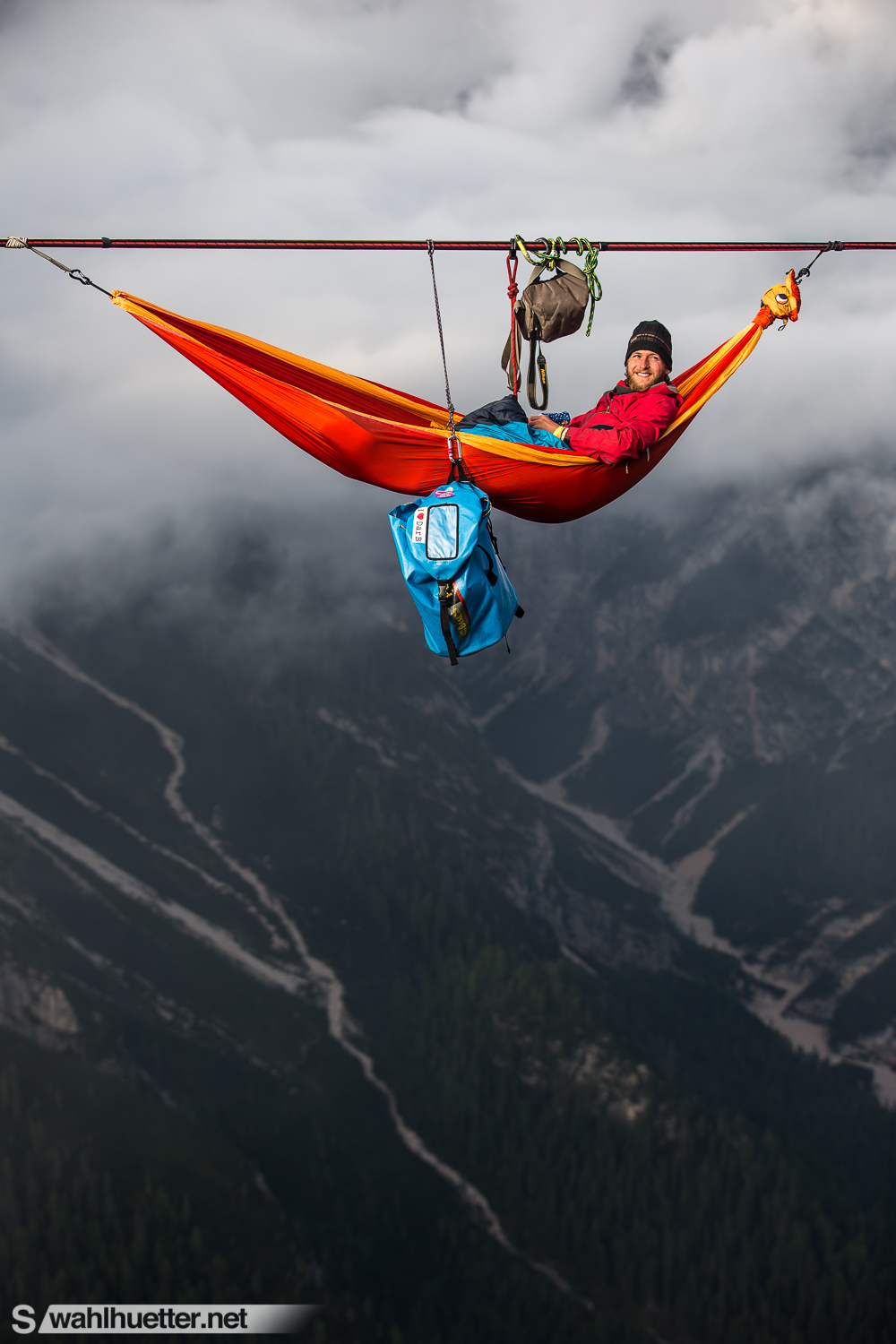 A short video clip of the whole action by the crew of Frischluft Film can be found here.

THE FOLLOWING STUNT IS PERFORMED AND DESIGNED BY A PROFESSIONAL TEAM OF ATHLETES AND RIGGERS. (–>The set up has a breaking strength of >150 kN = >15 000 kg for the main line and additionally a redundant back up. Maximum force was 32 kN = 3200 kg. 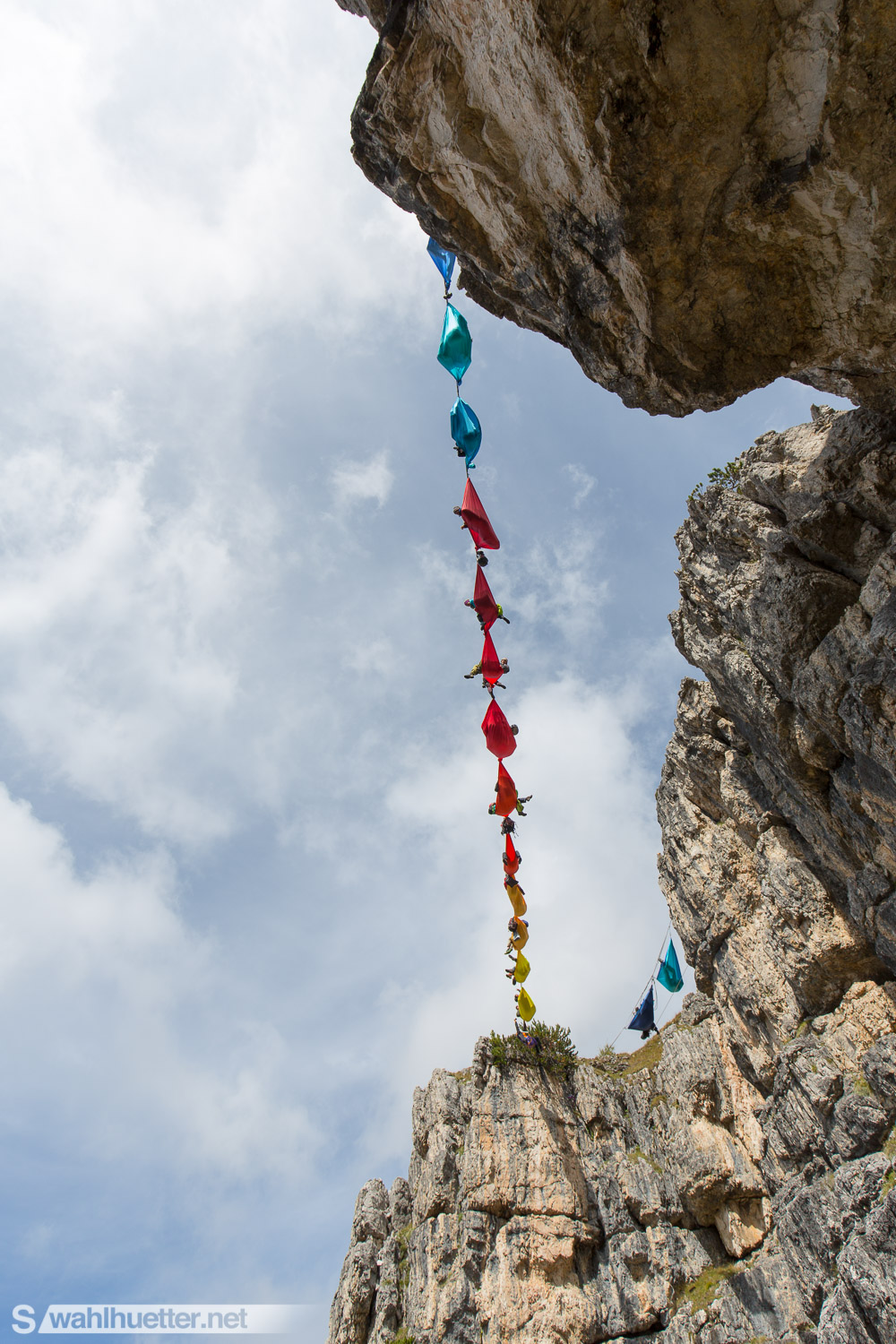 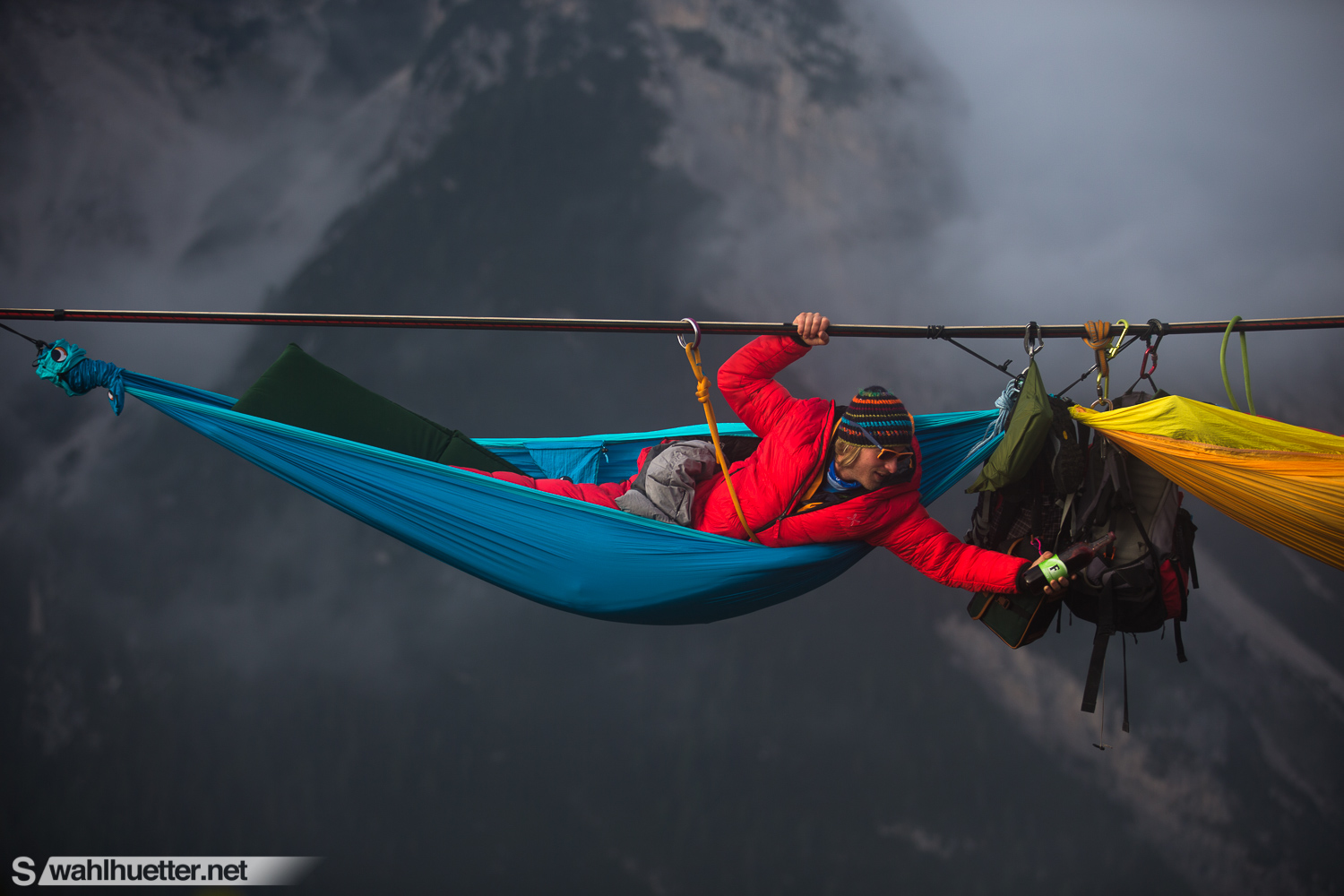 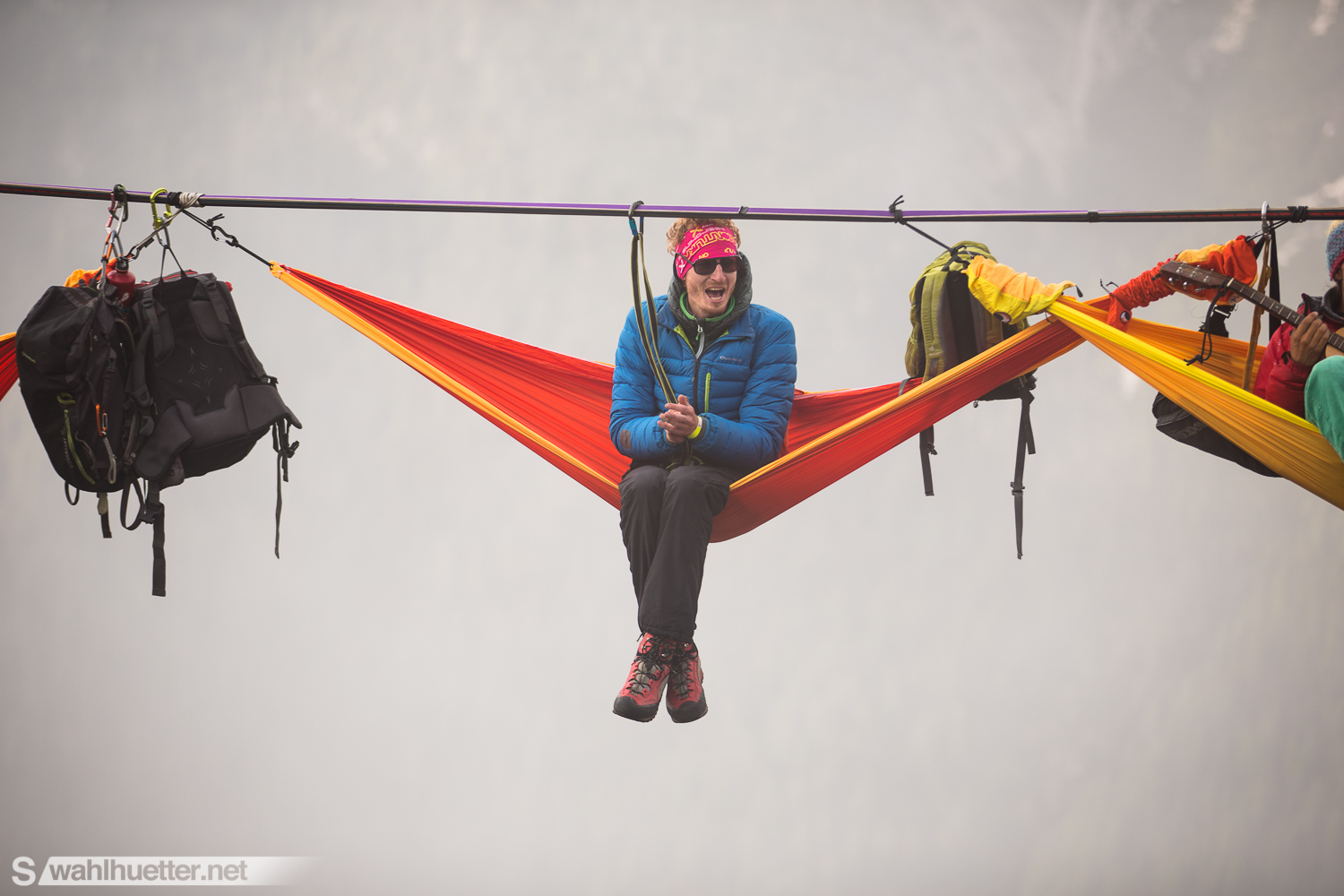 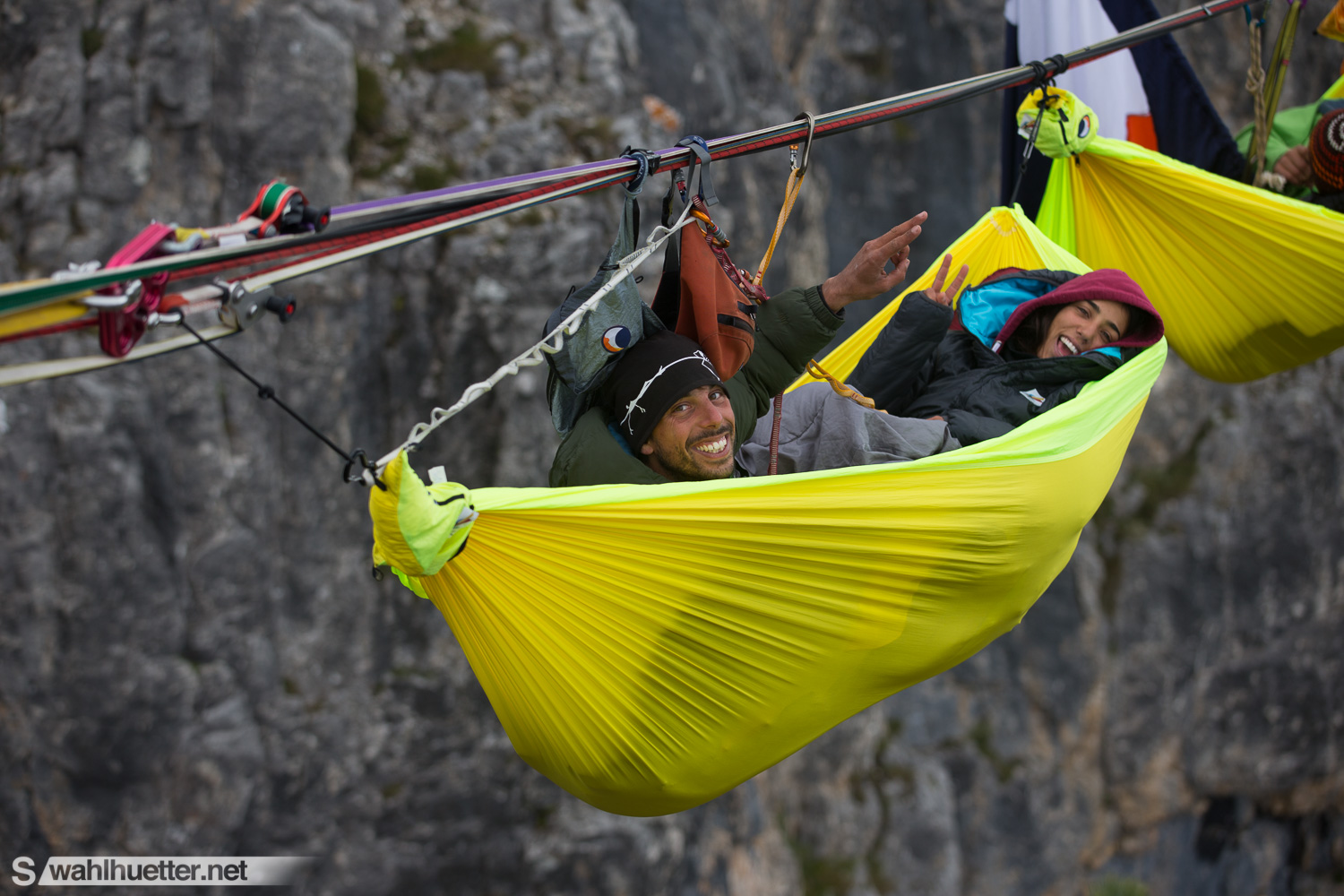 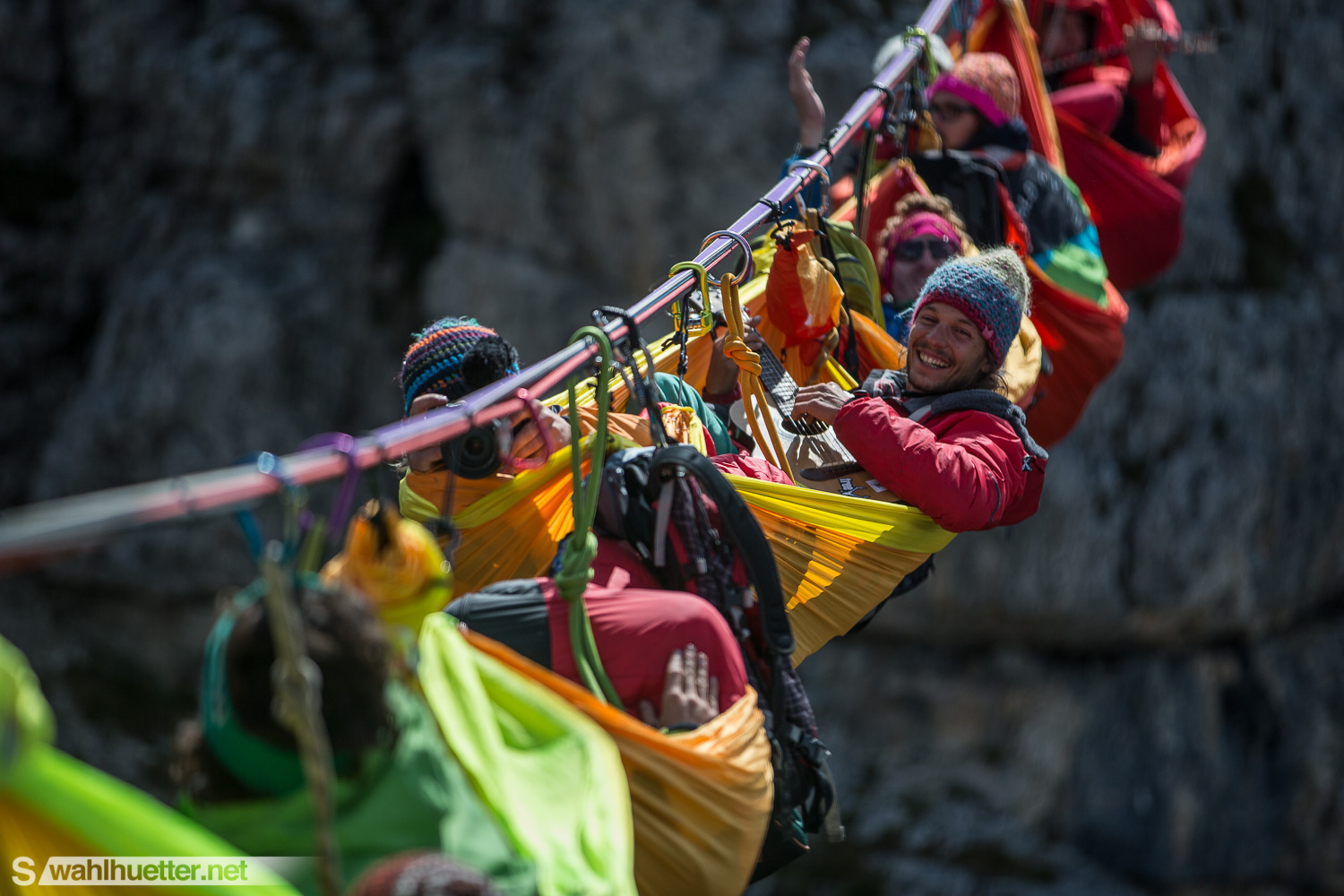 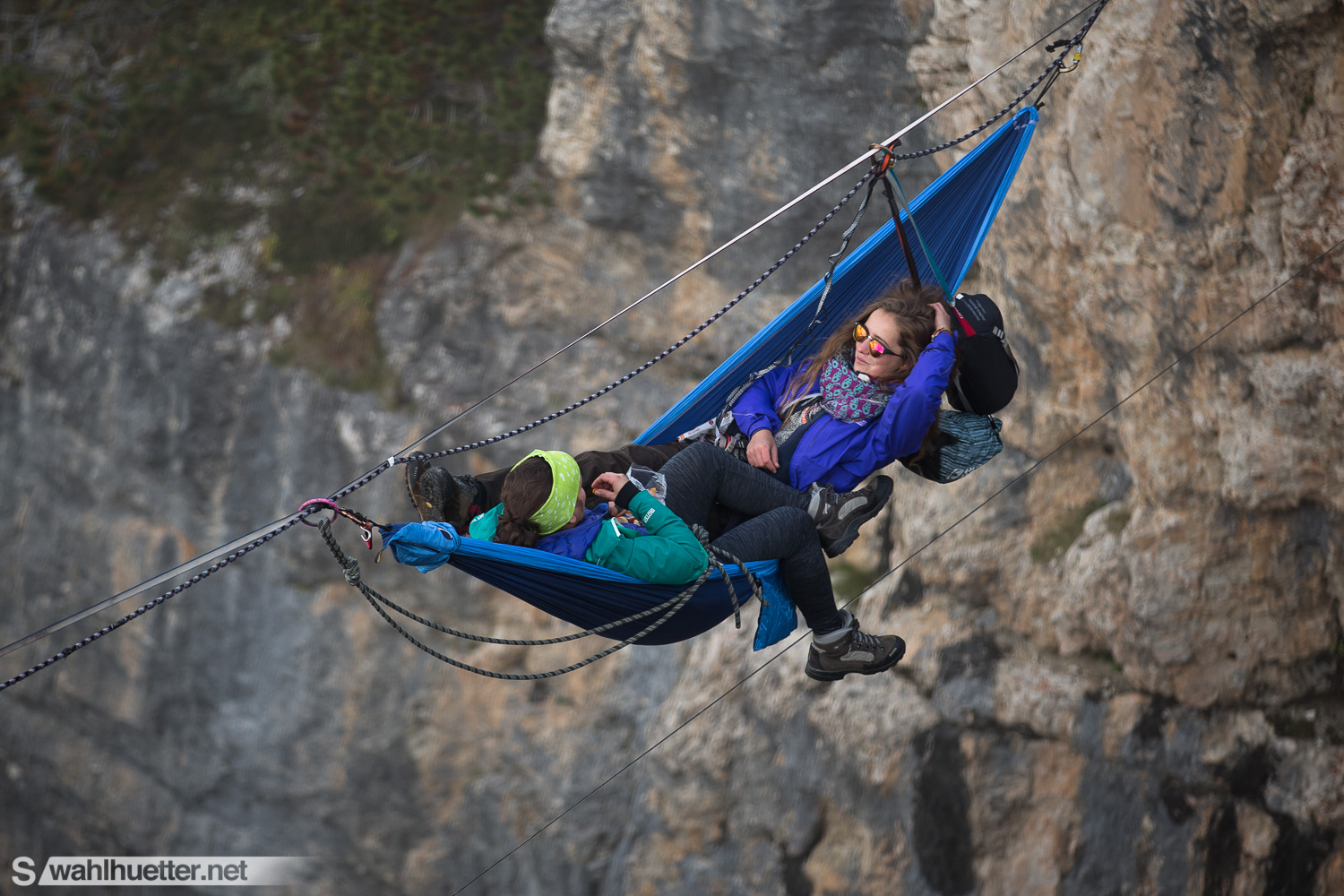 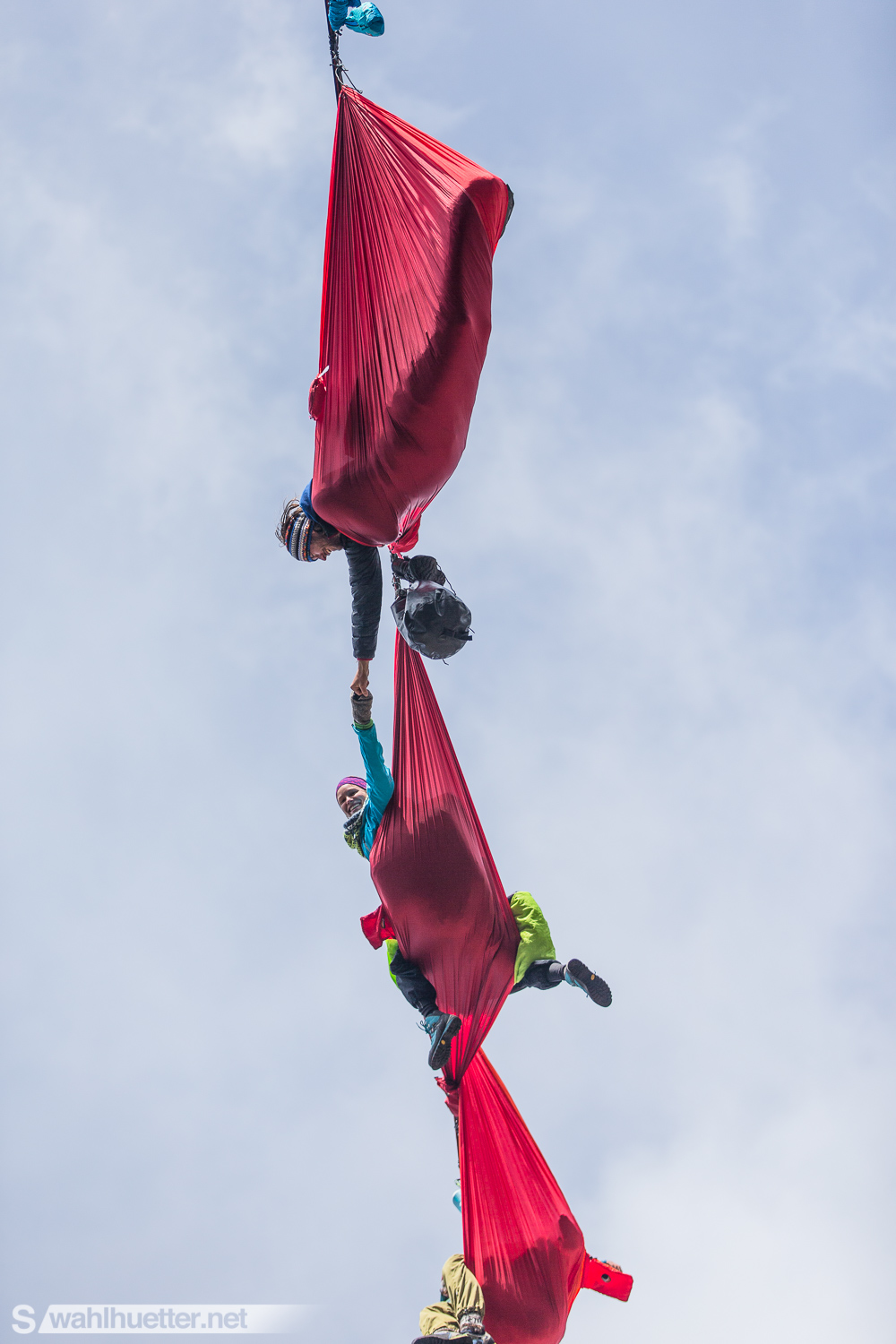 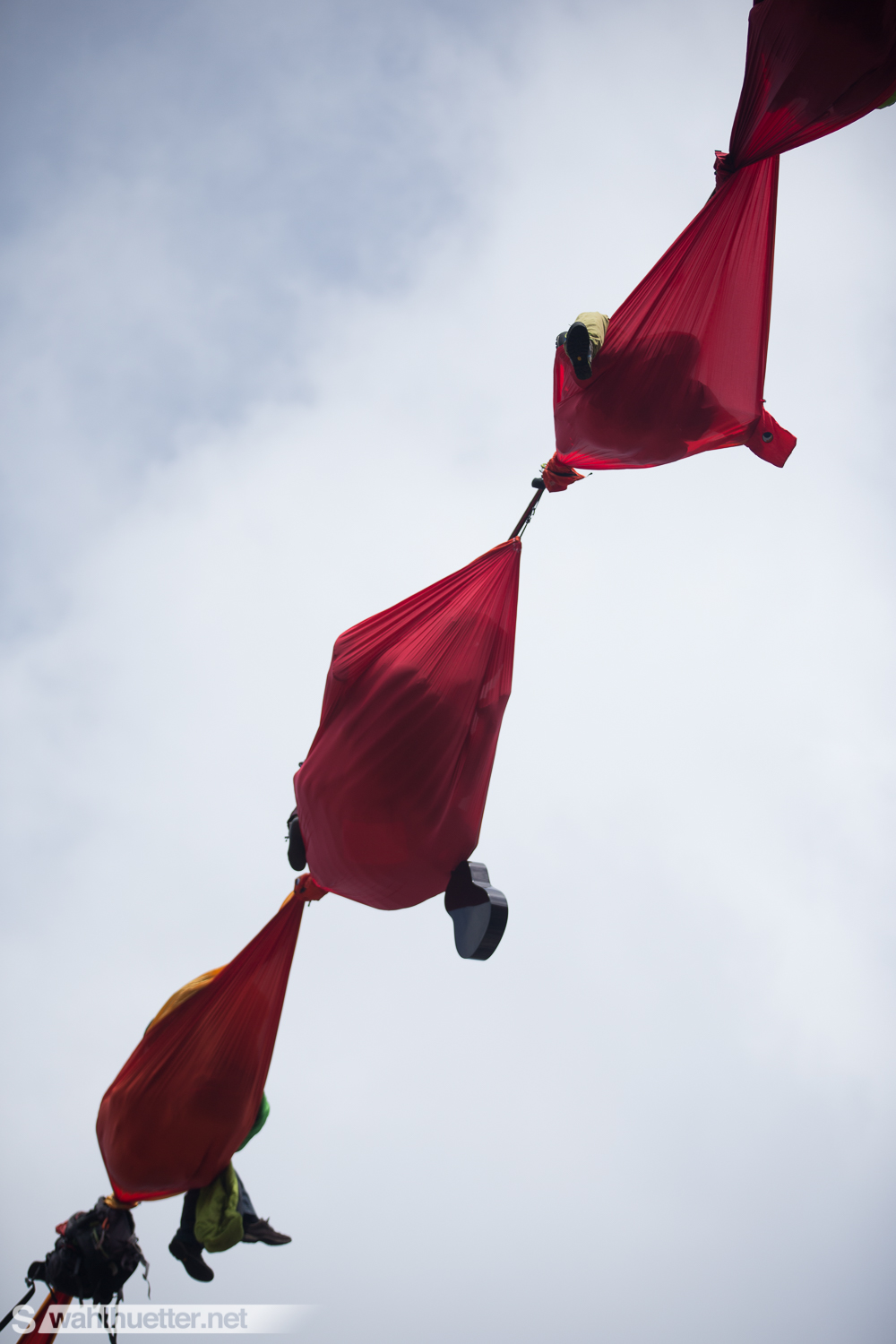 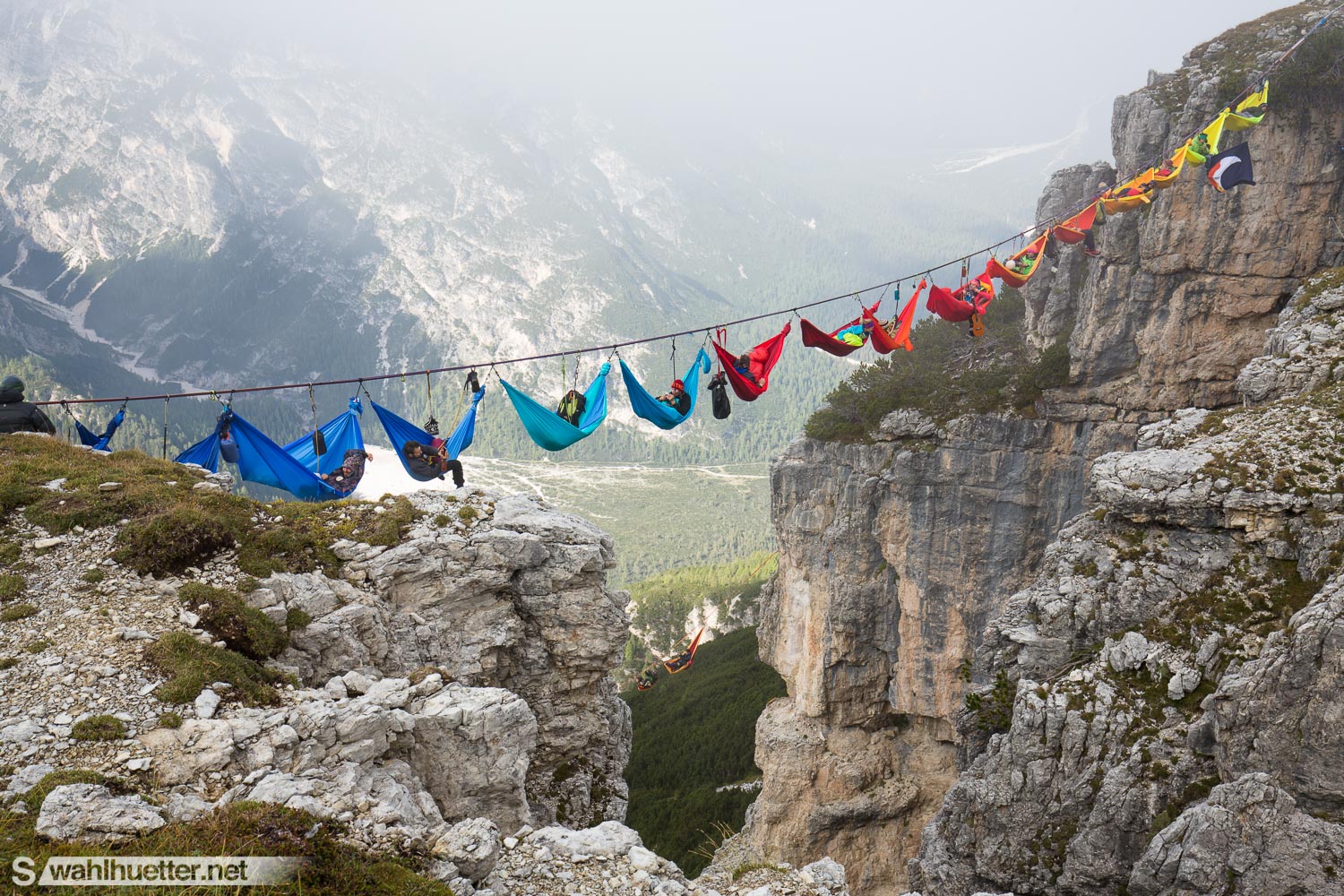